The Ocean Race, the world’s toughest sailing race, has collected vital data about the impact that humans are making on Europe’s seas and has found microplastics, and in particular, microfibres, to be prevalent across the length and breadth of the continent. The data gathered in the Race has shown the Baltic Sea to have the highest levels of microplastics in Europe on average, with 230 particles found per cubic metre, double the amount found in the Mediterranean (112 particles per cubic metre), which is considered a hotspot for plastic pollution. In addition to microplastic samples, among the data collected, CO2 has been analysed by EuroSea.

Two teams, Ambersail-2 and the AkzoNobel Ocean Racing have carried scientific equipment onboard to capture microplastic samples as they raced and the 36 water samples collected around Europe, including in the Baltic Sea, the English Channel, along the Atlantic coastline and in the Mediterranean Sea, have been found to contain microfibres – tiny plastic fibres that enter the environment from manufacturing, washing and wearing synthetic clothes. Fibres also originate from car tyres, ending up in the sea after heavy rain and run-off, and ​​fragmented fishing gear and lines. A third boat, the 11th Hour Racing Team, has taken measurements of CO2, sea temperature, PH levels and salinity – key indicators of climate change.

The CO2 data has been analysed by EuroSea (carried out mainly in the framework of task 7.1. ‘Carbon audit of the European relevant deep convection regions’). Measurements of dissolved CO2 captured have been submitted to the Surface Ocean Carbon Dioxide Atlas (SOCAT), which provides data for the Global Carbon Budget, a yearly assessment of CO2 that informs targets and predictions for carbon reduction. It is vital that scientists understand the levels of CO2 in the ocean to form an accurate budget and keep the world on track to stay within the Paris Agreement goal of limiting global warming to below 1.5 degrees Celsius.

Carbon dioxide levels have been found to be highest in the Mediterranean, as a consequence of warm temperatures and very little wind. CO2 has increased a great deal during the past 200 years, and the rate of increase is accelerating. 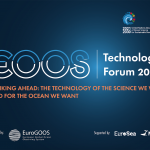 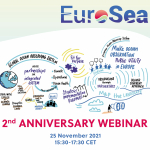 Recording of the EuroSea 2nd Anniversary Webinar – EuroSea progress and...
Scroll to top
Previous Next
Close
Test Caption
Test Description goes like this
XWe use cookies on our website to give you the most relevant experience by remembering your preferences and repeat visits. By clicking “ACCEPT ALL COOKIES”, you consent to the use of ALL the cookies. However you may visit Cookie Settings to provide a controlled consent.Read MoreCookie settingsREJECTACCEPT ALL COOKIES
Manage consent