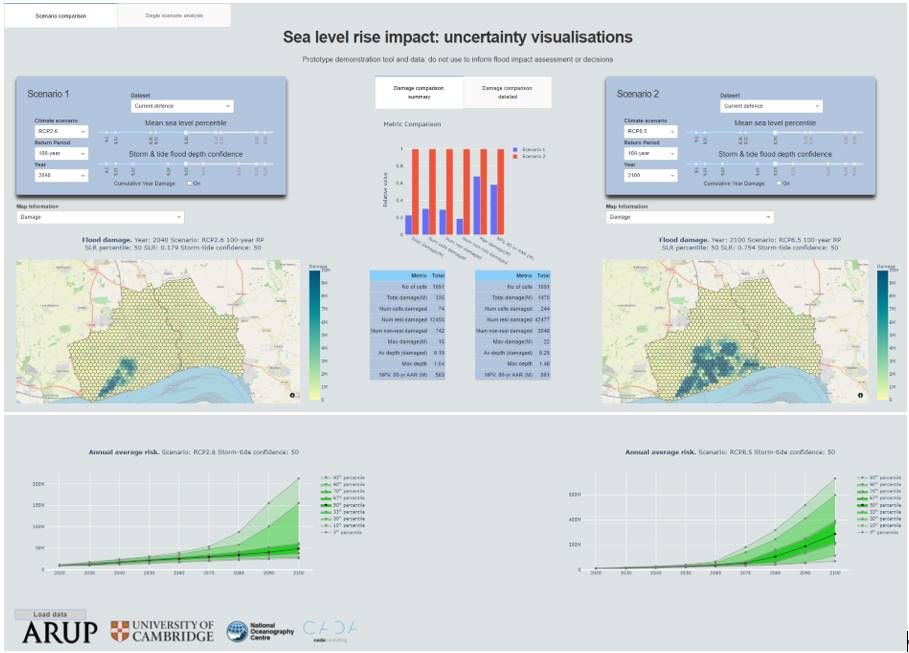 As part of the EuroSea work package 5 ‘Operational Services’, the team working on the prototype sea level planning and scenario visualization tool explored how the deep uncertainty over climate change induced sea level rise (SLR) can impact decision making at the early stages of the process, aiming at improving decision making for flood risk management in the coastal zone. To tackle the challenge, Hull on the East Coast of the UK was identified as an ideal case study location.

During a series of workshops, a workflow was produced to deliver the modelling approach and visualization prototype. The basic premise was to visualize the economic damage resulting from a large set of SLR flood risk scenarios. This required a correspondingly large set of simulations to generate the flood risk data and estimate the associated economic losses. The aim of the approach is for this workflow to be replicable in alternative locations.

A modelling approach was developed to run the required set of simulations quickly, including sea levels, waves and their overtopping and flood spreading on land. However, the data volume and complexity of the modelling results creates a challenge. How can the user understand the data and how can it be used to inform decisions on the impact of SLR? This issue has been resolved through the creation of a visualization prototype which is a web-based interface to the data, allowing the user to easily select a scenario and rapidly change the scenario and compare to other scenarios. In this way the user can get a feel for how decisions on the originating uncertainties alter the overall flooding in the region, its distribution and the resulting economic impact.

Although the modelling approach and the visualization prototype will be further refined in the future, this task has proven that the prototype sea level planning and scenario visualization tool is a viable prospective means of communicating the high degree of uncertainty that is inherent in projections of sea level extremes.

More details on the modelling process, the sources of uncertainty, geographical flooding aspects, and recommendations for further finetuning, can be found in a EuroSea deliverable. Michael Dobson (ARUP) can be contacted for further information. The tool was presented at the UN Ocean Decade Predicted Lab event on 17 September 2021.

Scroll to top
Previous Next
Close
Test Caption
Test Description goes like this
XWe use cookies on our website to give you the most relevant experience by remembering your preferences and repeat visits. By clicking “ACCEPT ALL COOKIES”, you consent to the use of ALL the cookies. However you may visit Cookie Settings to provide a controlled consent.Read MoreCookie settingsREJECTACCEPT ALL COOKIES
Manage consent