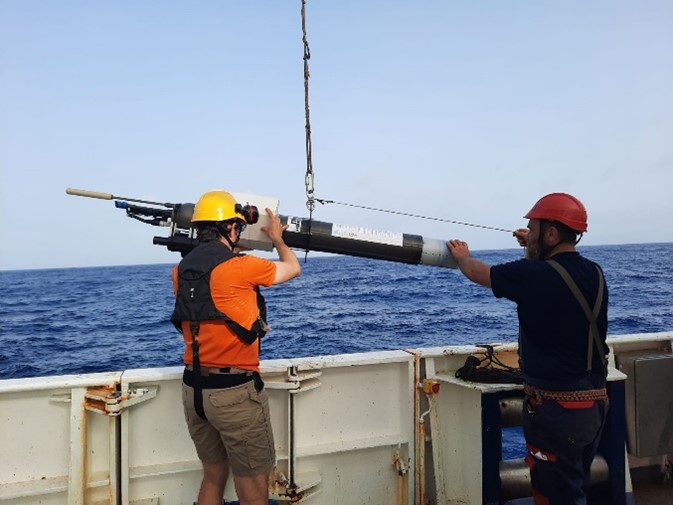 Deployment of one of the ARGO floats in the tropical Atlantic during the the PIRATA-FR31 cruise. (Credit: R. Cancouët/Euro-Argo ERIC)

Developed in EuroSea task on ‘Quality enhancement of tropical carbon fluxes through network optimization of the Tropical Atlantic Observing System’ of the EuroSea Climate Demonstrator (WP7), Euro-Argo ERIC has procured 5 BGC Argo floats equipped with dissolved oxygen, pH, chlorophyll-a, downwelling irradiance and backscatter sensors in addition to the CTD head. Together with colleagues from SU/LOV, the technical team has performed intensive acceptance tests at the Ifremer premises (pool tank of 20 metres deep) to check several float components (hydraulic, communications) as well as sensors behaviour. These testing procedures maximise the chances of successful deployments at sea. Water samples have also been collected and analysed to measure dissolved oxygen concentration profiles in the pool simultaneous with the floats profiles, enabling to perform a first inter-comparison and quality check of the floats data.

Following the final deployment plan, the 5 floats have been deployed in the tropical Atlantic during the the PIRATA-FR31 cruise that took place in March-April 2021. The data decoding is organised in Real Time, following Argo Data Management and Coriolis DAC procedures. The floats and the data can also be monitored and visualised on the Euro-Argo web portals (floats – data; type “EuroSea” in the search bar). Data quality is regularly checked by the task team partners and a first comparison with the oxygen data collected during the cruise at the location and time of the float deployments has been conducted. One pH sensor seems to deliver erroneous data (this has been flagged appropriately in the data system) while the data of the remaining floats and sensors meet the desired quality standards.

The collected data will help developing indicators for carbon flux at the air-sea interface and for ocean acidification based on an improved Atlantic observing system thanks to a neural network (CANYON) and with in situ data collected through fixed stations (PIRATA buoys with pCO2 sensors) and the planned future cruises (PIRATA etc.).

Scroll to top
XWe use cookies on our website to give you the most relevant experience by remembering your preferences and repeat visits. By clicking “ACCEPT ALL COOKIES”, you consent to the use of ALL the cookies. However you may visit Cookie Settings to provide a controlled consent.Read MoreCookie settingsREJECTACCEPT ALL COOKIES
Manage consent